knitting socks for loved ones with size 10 feet is unending. they go on and on and on and on. if n gets a pair he'll be lucky. i haven't even finished the first one yet.

note to single knitters - pick small partners. it will save time and yarn. these things matter.
Posted by grapecat at 19:50 No comments:

welcome to crazy town - population you

life has gone nuts. some good, some bad, all nuts. i mean honestly, do i bloody look like a squirrel? apparently, i can't even spell squirrel. thank god for spell checkers. (ha ha - you don't even want to know how i tried to spell that!!) i can spell, actually, mostly. i just have momentary lapses. you know, the last company i worked for used lotus notes for their email, and it always used to bug me in a particularly pedantic way that the lotus notes spell checker couldn't recognise the word email. after gritting my teeth for the millionth time i finally decided it was probably some techie's idea of a joke.

work is crazy. officially. it has been veering in that direction for some time but it has, without a doubt, hit the tipping point. the local gov't council that i work for is trying to undertake major cost saving exercises, several major directorate-wide restructures which include redundancies, a new revamped customer services programme, at year end. what could possibly go wrong? it's like working inside a manual of how not to do things.

i am only in the periphery, thank heavens, but it's amazing how much crazy drifts out from the centre. it is making it almost impossible to deliver the moves i need to do this weekend, and on top of this i am supposed to be trying to write one directorate's property strategy which, in this climate, is a farce. strategy is not even an option right now.

i am still waiting to hear if i am going to be taken away from all this into a new kind of crazy. dream job interview went ok - i think - it's hard to tell. it was scary. and difficult. and i had to answer questions like "what, in your opinion, would be the most important lease issues to consider for a twenty-person regional office in Kazakhstan?" (take that spell checker!) but i did my best and i did like the director a lot, which is good. either way, it's ok.

other things are crazy too - i fly out to winnipeg on the 21st. that is a different kind of crazy all together. more rabid squirrel than garden-variety nuts.(nope - still can't spell squirrel).

well as my mom always says, this too shall pass. my days are certainly flying by and i have to admit - i'm not even a teensy bit bored. exhausted, knackered, frustrated, and maybe slightly manic - but not bored.
Posted by grapecat at 19:10 1 comment: 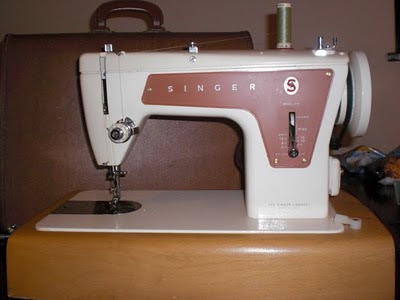 look what n found!! it's an old workhorse - a singer 239 - made in italy, so heavy he had to set it down several times getting it home. works like a dream. yay!

i've wanted one for ages but didn't want to pay too much as i wasn't 100% sure i'd actually use it. this sweet pea cost a whopping £25. not bad. sewing up humph's duvets* will have it paying for itself in about 2 months.

*humph is a nester. he can destroy a dog bed in minutes. he now sleeps on (very cheap) duvets which he shreds in a matter of months. they will now be sewn up :)
Posted by grapecat at 20:07 1 comment:

i have happy news!

a few weeks ago i applied for a dream job - the kind you apply for thinking - well - it's never going to happen but hey, why not go for it? good practice and all that.

the application was its own special circle of hell with questions like "why would you like to work at ______? Please explain, in no more than 300 words" and "in no more than 200 words, please describe your motivation for applying for this role".

it took me an entire afternoon. i actually used the word "relish". i wrote my heart on my sleeve.

deadline was 13 march and, hearing nothing, i figured well, nothing lost. perhaps in future i should tone down my enthusiasm.

today i got a call for an "initial interview". it's on wednesday (squeak).

i am now using words such as "delighted", "ecstatic", and phrases such as "it will probably never happen but OMG you never know! maybe?" and "s**t i really need to hem the trousers of that new suit i bought in the january sale"

judging from the application form this may be just the start of a long process and should it continue i almost definitely see "team building" exercises carried out with desperate enthusiasm in front of one-way mirror glass. and it will still be worth it. i don't expect to get it, but to get called to interview for the type of job i ultimately want - well - that is reason to celebrate indeed.

(there's a guy at work who went through 7 (SEVEN!) interviews only to be told "we're sorry but we feel you don't have enough _____ experience." gah. enthusiasm moderation is definitely in order.)
Posted by grapecat at 19:47 1 comment: