well, i've made it through 3 weeks of actually exercising and i can tell you that it is absolutely exhausting. this whole "running sets you up for the rest of the day"  stuff is utter bollocks. i am hoping this will get easier so i am still slogging through but dear lord am i ever tired. and my back is currently ageing about 2 decades faster than the rest of me which can't be good.

on the upside, i've learned that running in the morning isn't as bad as it sounds. mornings are so rubbishly awful anyways that it turns out even running can't make them substantially worse. i've taken to setting my alarm an hour before i need to get up to run, and when it goes off i scarf down a banana and a pint of water and go back to sleep for another 45 minutes. the key to this whole process is not to think about it too much, which is fairly easy at 545 am.

an even nicer upside is the post run snack n had for me this afternoon. so wrong, and so right. 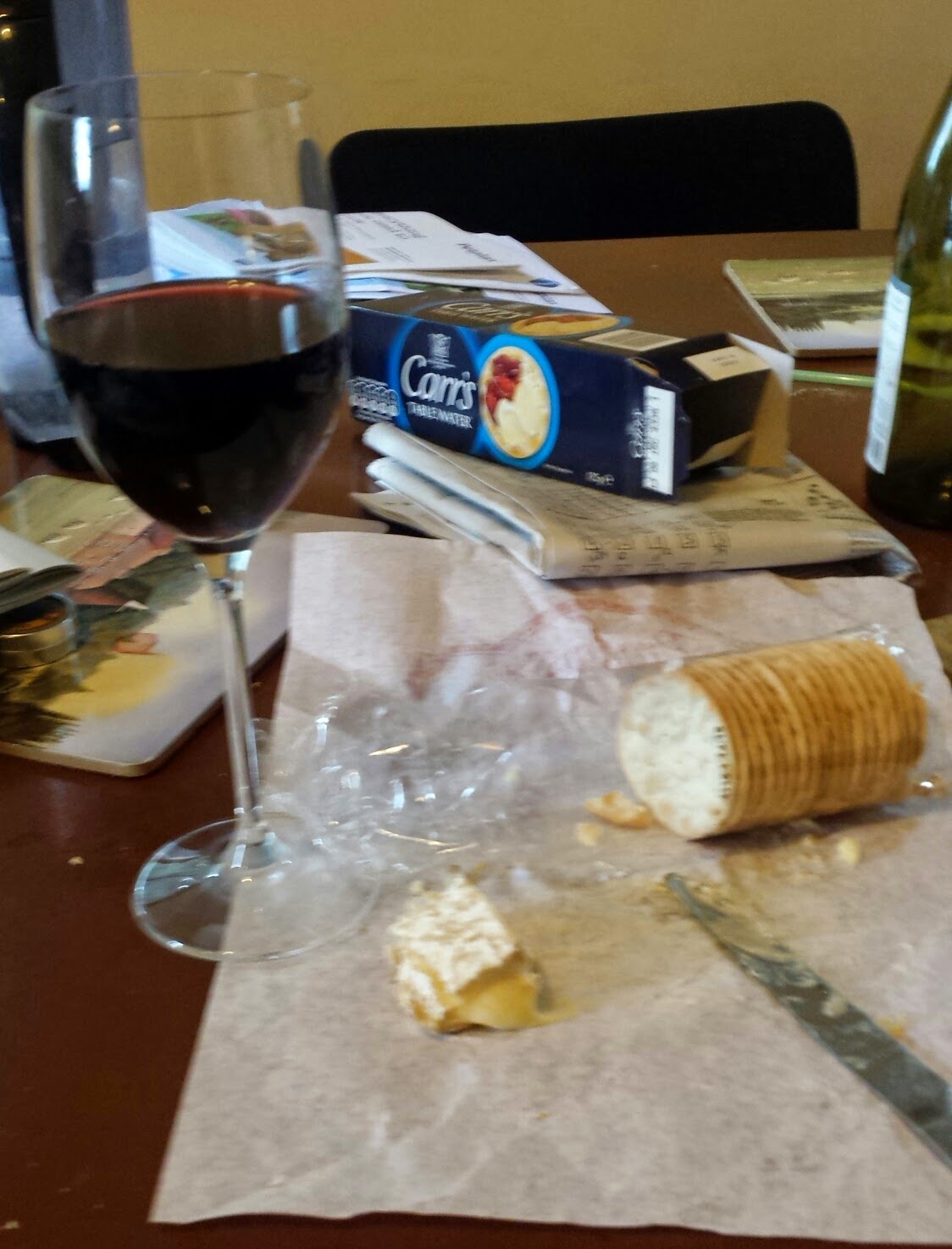 running may make you thin but probably not the way i do it!
Posted by grapecat at 14:26 No comments:

i've just recovered from my first run in 2 months and have cut myself a slice of cake and poured a glass of wine. isn't it great how doing one healthy thing helps you make better decisions for other healthy things?!  i have to start running again though. it's not to get slimmer (i'm not that fussed, although it's a nice benefit) or even to be happier (which it really does - you would have thought that would be motivating) but it's because it really really cuts down on my migraines. i had an awful one on friday and this has spurred me back on the running wagon. wish me luck.

the cake was a bit of a disaster but it tastes ok - (although after what can only be described as a painful, demotivating trundle in the freezing cold, ANYTHING would probably taste good). I read through the recipe and smugly thought to myself, i know step one takes forever (one of those nasty "cool to room temperature" sneaks) so i'll start with that and then butter and flour my cake pan. which i did. only to discover that i don't have a cake pan. i do have a vague memory of throwing it out in the great kitchen reorganisation of autumn 2014 (rusty, never that fond of it in the first place - "will buy another to replace next week" harumph). While i looked up "cake replacement pans" in the living room, my mixture boiled over on the stove in the kitchen. messy. very messy. and now no idea of how much remained or was lost in the sugary sticky mess coating the stove. well, i figured, it takes time to cool to room temperature, i will suck it up and go buy another pan. there are no bundt pans in faversham. not one. so i winged it. after all that, the fact that it is even edible is frankly impressive.

in much nicer news, i also finished a jumper in record time. i admit, i did get a bit compulsive by the end - i was just having so much fun seeing the pattern evolve over the yoke that i lost my head a bit and spend the bulk of several days - days, i should add where i should have been - you know - working (ahem) - knitting and cackling and getting quite carried away. 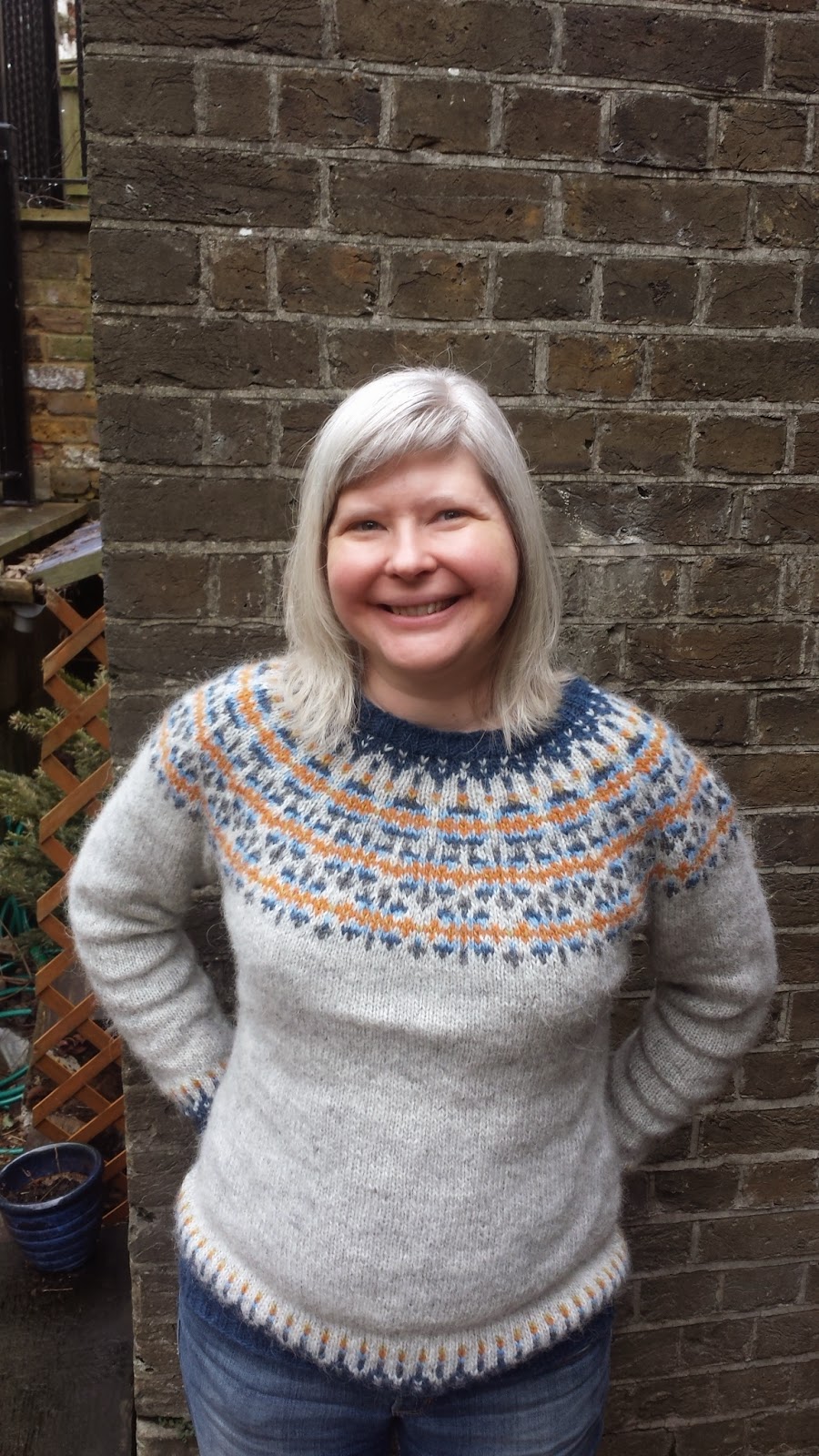 n has just pointed out that we do not have any white wine for the carbonara, which is annoying because he has only just coming in from getting the eggs that we also didn't have. it is, apparently, my turn. the planning faeries have obviously deserted this house.

come back faeries! we clearly need you!
Posted by grapecat at 15:08 2 comments: