the bikes are heavily branded by barclays, who are funding some of the scheme. the stickers, under the barclays logo, read:

i love it when people talk back.
Posted by grapecat at 11:23 2 comments:

of a different sort, admittedly. s and n are practicing their pub duo act. at the moment it's the doobie brothers long train running. i'm sitting at the table, drinking a glass of wine and wondering if i should go to bed.

they are playing as the analogue twins and they had their first gig as a duo last week (or the week before - yikes). it was as at a lovely country pub in chilham, which was holding a beer and music festival. as we walked in, another band was playing a song that s&n cover as well. catastrophe, or so i thought at the time. i really thought i had covered all possible ground in worrying about their gigs but this was a new one. luckily it was only one song. the gig started slow - there were p a problems and the pub seemed indifferent, but s&n talked to the crowd, won them over, and blew them away. by the end of the first set everyone was dancing.

they've been invited back to that pub, and they have another gig this month at a pub in faversham, so if this continues, they hope to be getting regular work throughout the autumn. n is so much happier to be playing, which makes me happy. i have to admit, though, my ironing is just not getting done as promptly as before. sigh. as i can hear my mother saying, "well if that's your biggest problem...."

it isn't of course, it's just refreshing to worry about small things for a change. the big ones aren't going anywhere.
Posted by grapecat at 21:08 No comments:

last night we volunteered at the kent beer festival - what a blast! what a lot of hard work! here's a picture from their website of the barn the festival is held in: 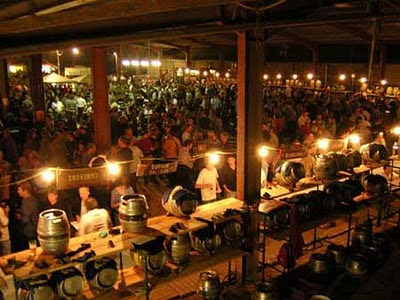 we signed in and were allocated to a section of the "bar". the entire back of the barn and about half of each side make up the bar - it is huge - our section was one length of the barn. we were told to get a glass and encouraged to sample all the ales so we'd have a clue when people asked about them. oh well, if i have to..... you know me, i'm a believer in research :)

the evening session opened, and what looked like a small tsunami of thirsty people streamed across the barn towards the kegs. that bit was a little nerve-wracking. however, we found our stride and were soon pulling pints with verve, "half-pint or pint?" "hogs back hog or a over t?" "a hoppy bitter? how about the surrey hills sheer drop - won beer of the year i believe!"

people came in waves - but there was almost always someone there. sometimes several rows of someones. we just did our best - people were lovely for the most part and pretty patient. the only bad part really was that the beer kegs are on two rows of scaffolding, and you have to bend down to reach the taps on the bottom row. that's fine for the first hour, but by the end my thighs were screaming. this morning they are a muted howl. i didn't realise that 4 hours of squats were involved.

i did get comments on my accent - mostly compliments, but one guy said, only partially joking, "what, an american telling me about beer?" "no," i retorted, "a canadian is telling you about beer" and flashed him my 100-watt you-know-i'm-right grin. his mates gave him a bit of a hard time over that. i received my year's quota of darlings, beautifuls and babes, which increased with the inebriation of our clientèle, and, as an unexpected side benefit, we saw pretty much everyone we know in canterbury.

we staggered out before the bar closed so we could catch the last train home to faversham, feeling guilty about leaving our fellow volunteers to handle the last half hour without us, but with legs all-to-ready to plonk down on the festival bus seat. it was a blast - and we'll do it again - that is if my legs recover by this time next year!

through a combination of laziness and not-thinking, n and i managed to leave a bin unattended and humph in the house. humph, being an enterprising and opportunistic young hound, took full advantage and ate (at a minimum - god knows what else) an entire cob of corn (sans kernels) and a rack worth of baby back rib bones. (oh man were they good - best recipe ever)

so far he seems fine, although his stomach has been making explosive noises. in the last hour or so he has been letting off room-clearing farts. i just hope those bones digest ok. they were slow-cooked for 2 1/2 hours so i hope that helps. oh god - we're bad dog-owners......

humph has eaten a cob of corn before - last summer i had this crazy idea (you tube videos - misleading - that's all i can say) that if i held a cob of corn, humph would eat it like we do. i know - i wasn't thinking then, either. humph took one sniff, grabbed the corn, and made me immediately remember that he is stronger than i am and he also cared a lot more. he latched on with his jaws and looked me straight in the eye as he backed up - there was no way i was getting that cob back. n would have helped but he was too busy busting a gut laughing. humph ate the whole cob and was fine except for scary poop the next day.

please let this be the same.

in which we contemplate the vagaries of human nature that make procrastination so alluring and the creative shenanigans achievable when one is trying not to do that which they know damn well they should be doing.

aka crap isn't this dissertation done yet?

i realise wailing about it won't help (well it may help me but even humphrey is looking askance at this behavior and you should see some of the maneuvers he gets up to) but oh man oh man. it's a struggle sometimes.

so i console myself with the fact that i have got really organised today - i have a good chunk of material digested and noted, and i know where the next block is, but the horribleness of actually writing is starting to impede my progress as part of my brain knows that this is the next inevitable step and is frantically scurrying around trying to avoid it. i don't understand why my own brain can't at least agree - it seems unfair. it will get written - there is no other option. we all know this (brain - i am talking to you). just quit fighting and go quietly. please.
Posted by grapecat at 14:46 No comments:

Posted by grapecat at 20:20 No comments:

i worked from home today - no - stop laughing - i really did. i mean not ALL day - obviously, but i got through about 3 office days worth of project documentation. you write a proposal report, you give presentations, you answer questions, they finally say yes, then you're faced with about 6 core documents that have to be done immediately and that you will live and die by for the next 4 months. no pressure.

and i send drafts to the rest of the team i'm slowly putting together saying things like, "how does this look for you" and "from an hr perspective does this work?" and they all go "yeah yeah yeah" thinking, thank god i don't have to write this shit, let alone read it.

and there will be some small or not so small error that i have made through sheer mind-numbing boredom of ms project, or the telephone ringing, or thinking days and inputing weeks, and no one will notice until the end of august when it becomes apparent that the project plan has us holding 15 team meetings in a day and a half. and everyone will say, "who wrote this? what an idiot" and i will say "well you ok'd the hr timeline". and we will squabble unbecomingly.

so i have spent the day quantifying that which cannot be quantified (risk likelihood: likely; risk level: moderate), and covering my ass with management speak and project mumbo-jumbo. it was quite fun, actually.

now we're sitting in the garden, drinking (illicit - it's only thursday) beer - and - frankly- being smoked out. what the hell does he have on that thing? is he calling for help?