another beautiful run this afternoon through the kentish countryside. these runs through the lanes can only happen in the daytime now - it's too dark in the morning before work or when i get home. the dark days are coming.

which is why yesterday saw me purchasing a wind-proof, water-proof running jacket so bright that even my 11-year old self in the throes of a serious fluorescent jelly bracelet phase (not to mention the fluorescent shorts and t-shirts - hyper-colour -remember those???!) would have been appalled. i also picked up reflective armbands with flashing lights.

cause i still can't quite believe it myself...

no stretcher required - phew. i even had fun (now a year or two ago if i'd heard that i would have recommended you cart me off for some pretty hardcore psychiatric drugs because clearly i needed them). i finished in 1 hour, 9 minutes and 2 seconds - and i wasn't last - and i beat the guy in the super mario costume (that may sound ungracious - sorry). i wasn't even the slowest faversham running club racer :)

i just don't even know what to do with myself now! although whatever it is it really needs to start with a bath.

in ten minutes we will leave the house and i will join 600 other runners for the faversham 10k race. scared doesn't even begin to cover it. i have a sore throat too - although i honestly don't know if its a coming-down-with-a-cold sore throat or my body's last ditch attempt to stop this nonsense and bring me back to my senses. i am trying to explain to my body and mind that it would be eminently helpful if we could be together on this endeavour but so far they are not on speaking terms. i just hope when push comes to shove they'll snap out if it or i may be the first runner to actually have to be stretchered off, stiff as a plank, from the starting line.

sunday we took the (very late, very hot) bus from dubrovnik to kotor, montenegro. we found a bank machine and a taxi and arrived at our apartment in dobrota. first impressions were a little shaky. for one thing we were starving and very very hot. my phone wouldn’t work and we didn’t have keys. it was SO hot. but marko turned up and we got settled and had a bite to eat. it takes a little getting used to – it’s not as accessible as a greek island but the view is breath-taking and the gin is cheap!


on monday we walked along the bay to the town of kotor to stock up on groceries and get cash. food is super cheap. we spent the afternoon swimming in the apartment pool and then at a beach bar where you sit on comfy chairs drinking beer, then swim, then have another beer.  bliss.


it is a lazy afternoon – n is still napping. i got up early this morning and went for a (very hot) run. we had breakfast on the terrace, a lazy coffee at the restaurant at the bottom of the steps, a swim and snorkel (a hundred shiny tiny rainbow fish…), lunch and reading on the terrace again then naps when the sun chased us in.

yesterday we had our sail on the monty b - a 40 ft yacht. it was amazing – we even got to sail! n tacked and helmed the boat. there was loads of swimming. i even got to jump off – twice! 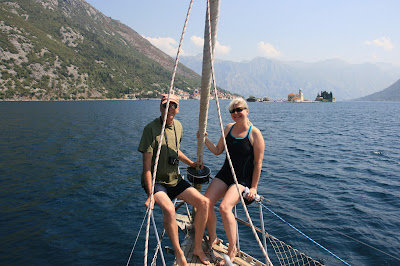 the taxi driver yesterday said it’s been the hottest summer – drought and stupid hot. he says he quite likes the idea of london’s 10 degrees and drizzle. i think i can wait awhile though…

Posted by grapecat at 09:33 No comments:

after another lazy afternoon in polace we caught a very hot very stuffy ferry to dubrovnik - another hydrofoil with no air conditioning. we were like cooked chickens when we were finally expelled, gasping, onto the dubrovnik docks. we found the bus easily and were deposited outside the pile gate in the early evening. it was quite the shock after quiet mljet – suddenly people everywhere! thank god for gps – i just turned on my phone and we winded our way like james bond through the narrow old town streets to our apartment (about 1 million stairs up).

the apartment was perfect, and so was dubrovnik although we got a bit touristed out after awhile. saturday morning we waked the walls (!!!! - i have always wanted to do this!). it was hot hot hot but we were early enough that there weren't too many people. by the end i was about as hot as i have ever been i think, but very happy.

we spent the afternoon swimming and drinking rather expensive beer at a beautiful bar cut into the rocks called buva and generally had an amazing time.

on sunday morning we got up really early and went for a quiet walk before the tourist hordes descended. it was so beautiful. i have always wanted to go to dubrovnik and i loved it.

Posted by grapecat at 10:35 No comments:

we got up early yesterday and caught the ferry from split to mljet. mljet is an island on the dalmation coast - it is special because over half of it is a designated national park, and there are two large inland salt-water lakes in the park. the ferry was a hydrofoil- you couldn’t go outside which was disapointing. the trip took about 3 ½ hours – a few stops, as more and more people got on.  we got off at pomena, mljet. it was much smaller than i anticipated. we bought our tickets for the national park, and asked how to get to soline. bikes or walk - "no cars on the park paths". how far? bike man said 10k, park lady said 3. turned out to be 6. 6 hot sweaty kms. but a beautiful path – turquoise lakes, pines, and the ever-present background (foreground?) buzz of the cicadas or pine beetles or whatever they are. Neal says they sound like they are shaking miniature maracas, I think they sound like a sprinkler rotating.

soline is a road with a row of restaurants on one side (using the term loosely!) and a row of buildings on the other. we found our rooms with a little difficulty, and went exploring.

everything here happens very slowly, if it happens at all. i get the feeling they wish we would all just go away, although they are friendly enough when you talk to them. maybe it’s been a long summer. i would be cross too if all i looked at where grumpy entitled skinny tan italian women! (there are A LOT of those). we swam in the sea, and the big lake. neal has now snorkelled! There’s not so much to see but it’s still fun.

there are three sets of rooms and each “house” or set of rooms seems to have its own “restaurant” so we have stuck to ours. each restaurant has a huge outdoor cooking oven/grill. Last night we ordered grilled fish and got a huge platter with 6 of the yummiest fish I’ve had in a long time.

the problem to solve today was how to get out – another 6 km roasting hike with bags not enticing. we rented bikes (eventually!) and found a route where an island taxi goes. we continued on to polace- beautiful. bigger, and much posher. some serious yachtage.


it seems like everyone in polace is there in the evening and goes out during the day. we had a restaurant more or less to ourselves for the afternoon. went for a swim, and came back, via the lakes. the park paths were really fun to bike. it is opposite in soline, where everyone comes for lunch and by evening it is only us here – and a few more families all staying. we watch the setting sun glinting off of the pines and listen to the cicadas.

i've just handed back a very excited (although bathed and pajama'd - go me) four and a half year old to his parents, who really are very good friends (still!). He was actually very well behaved, but when you don't have children, spending 52 hours with a snapper cold turkey like that is a bit of a shock. I am now sitting in my toy-free (how do they get everywhere like that? why so many small sharp pieces? why do they make so much noise? who decided the toy piano needed a bird chirping voice? WHO? I would like to have some serious words with them) and QUIET living room with a rather large whiskey.

he's still in the 'why' stage which can not only get quite trying, but often leads down paths you do not want to go down. "what are the stones in the grass" leads alarmingly quickly to "but why can't we dig up dead people? i want to see one!" (when i laughed about this to his mom, she said "tell him it's not polite to dig up dead people" which i found to be quite an illuminating insight into the british psyche). i also find it alarming how many ways there are to seriously harm yourself when you're four and intent on jumping off of any surface at any height, and running pell mell down stairs, and clumsy at the best of times. my heart was in my throat half the time. "why can't i climb up there?" "because i'll have a heart attack. "oh." "what's a heart attack?"

its good to see how other people live, and there is something completely endearing (if a bit sticky) about chubby preschool arms wrapped around your neck, but i am feeling very very happy with my own lifestyle choices at the moment.
Posted by grapecat at 19:19 No comments:

our friends have entrusted us with the care of their four and a half year old son for the weekend while they attend some fancy celebrations on the isle of wight. i don't know who is crazier - us or them. i am somewhat comforted by the fact that there are two of us and only one of him which evens up the odds at least in the energy stakes. and the fact that out of 52 hours he'll be sleeping (hopefully) for 22 of them so that only leaves 30 hours of actual child care. is that too much telly do you think?!

anyways suffice to say there are unlikely to be any holiday posts this weekend - but i will catch up next week and put up some pics. that us, assuming i survive the next 52 hours! 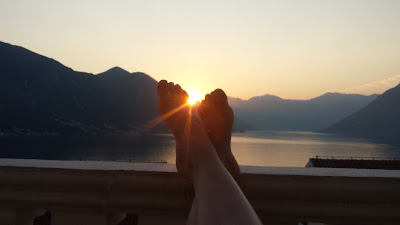 we're back from our holidays - 13 days, 2 countries, 3 unesco world heritage sites, 4 novels, countless swims and sunsets, and approximately 50 billion stairs. our trajectory began in split, croatia, then the island of mljet, then dubrovnik, then down to the bay of kotor in montenegro and now today home. i unplugged completely but i did write notes so in the next days i will try to decipher my scrawls and add a few photos and details of what was a really lovely holiday.

now i will just try to adjust to the 20 degree centigrade drop in temperature and the knowledge that it is back to work and the more ordinary facets of life. most of all though, i feel freer - just knowing there's so many other ways of life and people living them sets me free and opens the doors of a cage that routine and day-to-dayness can wrap around me without my noticing.

but tonight i am content with pulling on a pair of wool socks and trying to get used to wearing trousers again. what a sad waste of a lovely tan!
Posted by grapecat at 17:26 1 comment: